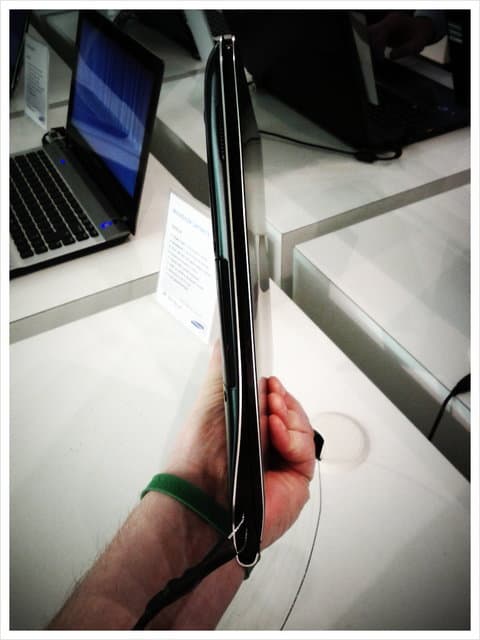 I’ve been lucky enought to put my hands on a Samsung 900x3a for a couple weeks. I fell in love with it at a Samsung event in Brussels, like the picoprojector, and had been asking for it ever since.

The design of the Samsung 9 series makes you scream wow. When you get it, even the box makes you say wow. It is beautiful, sleek and different, something you want to carry around because it will make others say the same and look at you in a much better way. And that is exactly what happens. Wherever I’ve pulled it out questions have arised about it and everybody wanted to hold it. That’s where the second hit comes…

Trully ultralight and ultraportable The computer is so light you are just shocked.

On the bad side, it is a finger print magnet, which can easily ruin its looks (see the picture underneath, lower right corner of the computer.) And what really sucks about it is that the duraluminium body surfaces are really nice to tuch. I personally hate the touch of aluminium and the coating of the 9003xa is very agreable to touch.

The 900x3a comes with a matt 13.3 inch display that is as good as the computer is goodlooking. Fantastic. The only con is the fricking ugly shiny cheap plastic that surrounds it. Seriously, with a computer this well designed I don’t understand how they’ve screwed up the beauty of the screen with that ugly and scratch prone frame aroun the screen and the keyboard.

The computer comes with a surprising array of hidden ports on both sides: 2 USB ports (one 3.0 and one 2.0), a mini HDMI, a microSD card reader, and a proprietary port for the Ethernet adaptor. I don’t like carrying parts with me to make my computer work, and even less proprietary connectors, but appreciated the possibility of connecting the computer to the network with an Ethernet cable. The lack of a vga adaptor is a real bummer. The fact of having a microSD card reader instead of a regular SD reader has started a debate in my mind I’ve not been yet able to solve. I guess that basically what they’ve thought is that the users are turning to their smartphones more and more and so their compatibility should prime over the cameras that most people have.

The main negative point for me is here: the battery can not be taken out easily. When working with a portable computer you are not always on the go, in fact most people use them as a substitute of a regular desktop, just connecting a big screen, a keyboard and a mouse. The battery is the part of the computer that degrades the fastest, with every charge cycle, and not being able to take it out while at work on my desk just screams back at me “you are killing the battery!”

As soon as I got the ultraportable I put my hands into linuxifying it. My working operating system is Linux and I needed to see if there where any hardware problems. Installing Ubuntu on the Samsung 9003xa is easy as soon as you learn that you have to install on the right side port.

Overall Ubuntu worked fine, except for a very anoying problem with the mousepad, which meant that I had to choose between being able to click & drag and to scroll. Any of these two choices is bad and reduces productivity a lot.

The procesor was strong enought to do some basic video editing with Kdenlive, but I guess all of todays’ computers are easily capable of doing so. Overall the computer was not superfast, but quite good. I am looking for a bit more punch in my next portable computer.

Unfortunately, the Windows version provided was in Dutch (talk about a steep learning curve…) so I could not really use it much, and my Ubuntu Linux was running good enought to skip Windows 🙂